Brushing Up and Being a Grammar Nerd

I like being a Grammar Brat.  The more I learn, the less — I realize — I know.  Isn't our language fun?  (Haha, many say that is monster talk.)  Our language is a defiant, mind-boggling fiend, I tell you!

So, I was on Skillshare brushing up on some information before I was ever ready to order the 1,100-page Chicago Manual of Style.  On Skillshare, I found a dude.  The dude knew a lot . . . but, unfortunately, his knowledge seemed to have what was to me a very obvious limit, and it began to falter like a car tip-toeing the stairs on its hind wheels.  It became awkward and very visible where his weaknesses in editing were.  And I worried over viewers learning incorrect information.

I know I shouldn't have, but Grammar Brats are called "Grammar Brats" for a reason.  We can't help ourselves.  We want to help.  We love the processes of explaining and fixing and teaching . . . even if we ourselves are in the same boat (hahaha, yes, we're hypocrites, a lot of us).

I went on a help-spree, poked some holes in his incorrect usage and omission of information on dialogue and quotations, on modification of quotes using brackets, and a few other very important things which can help writers move from the novice stage to a more expert one.

(If you want some more writing tips, head here, to my free Wattpad book.  Otherwise, skim down for the extra tips I'd thought were extra helpful and enlightening.) 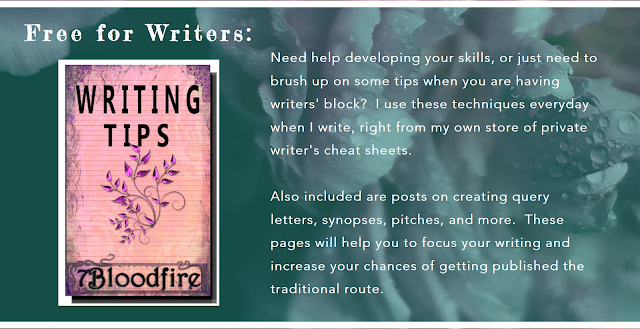 Welcome to My Crazy: 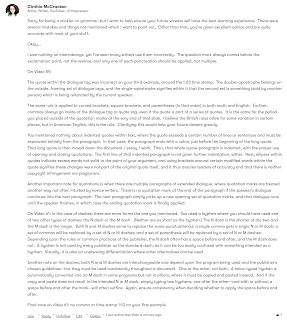 Sorry for being a stickler on grammar, but I want to help ensure your future viewers will have the best learning experience.  There were several mistakes and things not mentioned which I want to point out.  Other than that, you’ve given excellent advice and are quite accurate with most of your stuff.


I saw nothing on interrobangs, yet I've seen many writers use them incorrectly.  The question mark always comes before the exclamation point, not the reverse, and only one of each punctuation should be applied, not multiple.


The quote within the dialogue tag was incorrect on your third example, around the 1:23 time stamp.  The double-apostrophe belongs on the outside, framing set of dialogue tags, and the single-apostrophe signifies within it that the second set is something (said by another person) which is being reiterated by the current speaker.


The same rule is applied to curved brackets, square brackets, and parentheses (in that order) in both math and English.  Further, commas always go inside of the dialogue tag or quote tag, even if the quote is part of a series of quotes.  It is the same for the period you placed outside of the quotation marks at the very end of that slide.  I believe the British rules allow for some variation in certain places, but in American English, this is the rule.  Clarifying this would help your future viewers greatly.


You mentioned nothing about indented quotes within text, where the quote exceeds a certain number of lines or sentences and must be separated entirely from the paragraph.  In that case, the paragraph ends with a colon, just before the beginning of the long quote.  That long quote is then moved down the document / essay / work.  Then, that whole quote-paragraph is indented, with the proper use of opening and closing quotations.  The first line of that indented paragraph is not given further indentation, either.  Next, ellipses within quotes indicate excess words not valid to the point of your argument, and using brackets around certain modified words within the quote signifies these changes were not part of the original quote itself, and it thus assures readers of accuracy and that there is neither copyright infringement nor plagiarism.


On Video 61: In the case of dashes: there are more forms the one you mentioned.  You used a hyphen where you should have used one of two other types of dashes: the N dash or the M dash.  (Neither are as short as the hyphen.) The N dash is the shorter of the two and the M dash is the longer.  Both N and M dashes serve to replace the same punctuation(s): a single comma gets a single N or M dash; a set of commas will be replaced by a set of N or M dashes; and a set of parenthesis will be replaced by a set of N or M dashes.  Depending upon the rules or common practices of the publisher, the N dash often has a space before and after, and the M dash does not.  A hyphen is not used by every publisher as the standard dash, as it can be too easily confused with something intended as a hyphen.  Visually, it is also an unpleasing differentiation where other alternatives can be used.


Another note on the dashes: both N and M dashes are interchangeable and depend upon the program being used and the publisher’s chosen guidelines—but they must be used consistently throughout a document.  One or the other, not both.  A twice-typed hyphen is automatically converted into an M dash in some programs but not in others, where it must be copied and pasted instead.  And if the copy and paste does not result in the intended N or M dash, simply typing two hyphens, one after the other--and with or without a space before and after the mark--will often suffice.  Again, ensure consistency when deciding whether to apply the space before and after.

So, there you have it.  Some incredibly complex (yet easy to remember once put into practice) rules for beautiful punctuation!  It was very fun to correct an editor, haha!  I hope this was helpful!

Send me a message on my Contact Me form if you'd like to see some more grammar rules, or if I've missed something important!  The form is at the bottom of my home page at https://www.7bloodfire.com/.

And good grief, this would have been a perfect time to have worn my new "Because...#Reasons" shirt!  I'd have felt quite smug, wearing that! Events and News from the Biz Blog

Want to become part of an Indie community where writers and artists support each other and help each other in their journey to publishing? Head over to the 7Bloodfire Art and Story Facebook page.